A brief history of the life of Srila Prabhupada 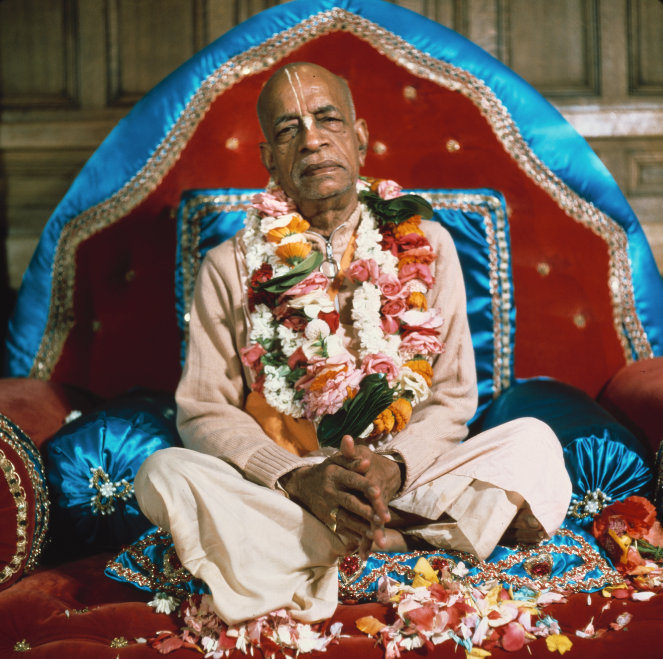 A.C. Bhaktivedanta Swami Srila Prabhupada was born on September 1st, 1896 in Calcutta,India. Later in life he accepted spiritual initiation from Srila Bhaktisiddhanta Sarasvati Goswami, founder of the 64 Gaudiya institutes. Srila Prabhupada was requested by his spiritual master to broadcast the ancient Vedic teachings through English language.

Following these orders, Srila Prabhupada started Back to Godhead, an English fortnightly magazine, in 1944 for which he acted as publisher, editor, copy editor, and local distributor.

In 1950 Srila Prabhupada moved to the holiest city of India, Vrindavana, to prepare for a renounced order of life. He resided in a small room at the temple of Radha-Damodara and engaged, for several years, in deep study and writing.

In 1959 he accepted his renounced order of life (sannyasa monk) and began work on his life’s masterpiece: a commentated English translation of the eighteen thousand verse Srimad-Bhagavatam, one of the greatest epic scriptures of Vedic philosophy.

Srila Prabhupada’s simple living quarters and studies in Vrindavana, and the Back to Godhead magazine:

On September 5th 1965, at the age of 69, Srila Prabhupada headed alone to America to fulfill the mission of his spiritual master. He was the only passenger aboard the freight ship Jaladuta. Journeying for 37 days across the Atlantic, he suffered two serious heart attacks. 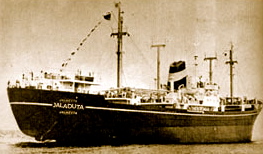 Finally arriving in New York City, he possessed only a suitcase, umbrella, a supply of dry grains, about 7 dollars worth of Indian currency, and several boxes of books for distribution. He didn’t know where to begin – New York was such an overwhelming city of material life.

Eventually working out a place to stay and still struggling to survive, he simply began singing the Hare Krishna mantra at Thompkin Square Park and preached to whomever would listen.

The time was right and things were radically changing in the US. The youth were looking for positive alternatives, something to give lasting peace after decades of war. Srila Prabhupada preached about the true meaning of life and people listened.

Nine months after his arrival he finally opened his first storefront center on 26 2nd Avenue. It was formerly a shop called Matchless Gifts, a prophetic name none the less. The doors were open to everyone. He would give lectures daily, have kirtan (singing mantras, songs of God) and cook prasadam (food offered to God). There in July of 1966 he established the International Society for Krishna Consciousness.

From here on, nothing could stop him. 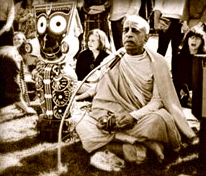 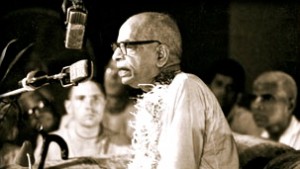 He soon traveled to San Fransisco and opened a new temple. From there he sent disciples to major cities throughout the world to open more temples. The influence of his teaching grew exponentially, spreading rapidly throughout the world, gaining media attention and reaching even the likes of the Beatles. George Harrison became a life-long follower of Srila Prabhupada.

In just twelve years, despite his advanced age, Srila Prabhupada circled the globe fourteen times, giving lectures on the philosophy of Krishna consciousness and how to apply it in today’s world.

With this demanding schedule, he simultaneously manifested a prolific output of Vedic literature that spans all aspects of spiritual life. Most of his writing and translation work was done between 1:30 and 4:30 AM. He slept three hours a day and only ate a handful of food. Later in the day he would speak to various audiences in public, and give guidance in private.

His books have become his greatest contribution to society, which are highly respected by scholars for their authority, depth and clarity. Srila Prabhupada wrote over 70 volumes of spiritual literature in only 11 years. This is unmatched in known history. They are used as textbooks in numerous college courses, have been translated to over 50 languages and are distributed to thousands of people every day throughout the world.

Srila Prabhupada writing and translating at night, on a morning walk, and with George Harrison and wife: 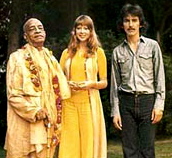 For one time donation