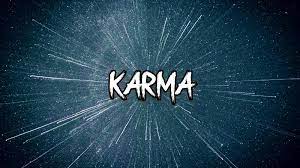 STEPHEN KNAPP - Karma is one of those topics that many people know a little about, but few understand the intricacies of it. To start with, Newton’s third law of motion states that for every action there is an equal and opposite reaction. On the universal scale, this is the law of karma. The law of karma basically states that every action has a reaction and whatever you do to others will later return to you. Furthermore, ignorance of the law is no excuse. We are still accountable for everything we do, regardless of whether we understand it or not. Therefore, the best thing is to learn how it works.

If everyone understood the law of karma, we would all be living a happier life in a brighter world. Why? Because we could know how to adjust our lives so we would not be suffering the constant reactions of what we have done due to the false aims of life.

According to Vedic literature, karma is the law of cause and effect. For every action there is a cause as well as a reaction. Karma is produced by performing fruitive activities for bodily or mental development. One may perform pious activities that will produce good reactions or good karma for future enjoyment. Or one may perform selfish or what some call sinful activities that produce bad karma and future suffering. This follows a person wherever he or she goes in this life or future lives. Such karma, as well as the type of consciousness a person develops, establishes reactions that one must experience.

The Svetashvatara Upanishad (5.12) explains that the living being, the jiva soul, acquires many gross physical and subtle bodies due to the actions he performs, as is motivated by the material qualities to which he obtains. These bodies that are acquired continue to be a source of illusion as long as he is ignorant of his real identity.

The Brihadaranyaka Upanishad (4.45) further clarifies that as the atma or soul in the gross and subtle bodies acts, so thereby he obtains different conditions. By acting saintly he becomes a saint, and by acting immorally he becomes subject to the karmic consequences. In this way, he accrues piety or the burden of impiety accordingly.

Similarly, it is stated that as a man sows, so shall he reap. Therefore, as people live their present life, they cultivate a particular type of consciousness by their thoughts and activities, which may be good or bad. This creates a person’s karma.

This karma will direct us into a body that is most appropriate for the reactions that we need to endure, or the lessons we need to learn. Thus, the cause of our existence comes from the activities of our previous lives. Since everything is based on a cause, it is one’s karma that will determine one’s situation, such as race, color, sex, or area of the world in which one will appear, or whether one is born in a rich or poor family, or be healthy or unhealthy, etc., etc

So when the living beings take birth again, they get a certain kind of body that is most suitable for the type of consciousness they have developed. Therefore, according to the Padma Purana, there are 8,400,000 species of life, each offering a particular class of body for whatever kind of desires and consciousness the living being may have in this world. In this way, the living entity is the son of his past and the father of his future. Thus, he is presently affected by his previous life’s activities and creates his future existence by the actions he performs in this life. A person will reincarnate into various forms of bodies that are most suitable for the living entity’s consciousness, desires, and for what he deserves. So the living being inevitably continues in this cycle of birth and death and the consequences for his various good or bad activities as long as he is materially motivated.

What creates good or bad karma is also the nature of the intent behind the action. If one uses things selfishly or out of anger, greed, hate, revenge, etc., then the nature of the act is of darkness. One will incur bad karma from it that will later manifest as reversals in life, painful events, disease or accidents. While things that are done for the benefit of others, out of kindness and love, with no thought of return, or for worshiping God, are all acts of goodness and piety, which will bring upliftment or good fortune to you. However, if you do something bad that happens because of an accident or a mistake, without the intent to do any harm to others, the karma is not so heavy. Maybe you were meant to be an instrument in someone else’s karma, which is also yours. It will take into consideration your motivation. Yet the greater the intent or awareness of doing something wrong, the greater the degree of negative reaction there will be. So it is all based on the intent behind the action.

However, we should understand that, essentially, karma is for correcting a person, not for mere retribution of past deeds. The universe is based on compassion. Everyone has certain lessons and ways in which he must develop, and the law of karma actually directs one in a manner to do that. Nonetheless, one is not condemned to stay in this cycle of repeated birth and death forever. There is a way out. In the human form one can acquire the knowledge of spiritual realization and attain release from karma and further rounds of birth and death. This is considered to be the most important achievement one can accomplish in life. This is why every religious process in the world encourages people who want freedom from earthly existence not to hanker for material attachments or sensual enjoyments which bind them to this world, but to work towards what can free them from further cycles of birth and death.

All karma can be negated when one truly aspires to understand or realize the higher purpose in life and spiritual truth. When one reaches that point, his life can be truly spiritual which gives eternal freedom from change. By striving for the Absolute Truth, or for serving God in devotional service, especially in bhakti-yoga, a person can reach the stage in which he is completely relieved of all karmic obstacles or responsibilities. Lord Krishna says in Bhagavad-gita (18.66): “Abandon all varieties of religion and just surrender unto Me. I shall deliver you from all sinful reaction. Do not fear.”