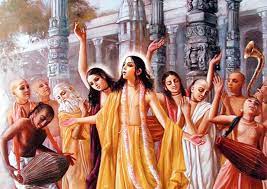 One of the most powerful practices of bhakti-yoga is the hearing of transcendental sound, which means to hear about Krishna’s qualities and activities as described in Srimad-Bhagavatam, or to hear Krishna’s practical instructions on how to achieve the transcendental state as given in Bhagavad-gita As It Is, or to chant the Hare Krishna mantra. (A mantra is a sound that frees one from illusion.) The Hare Krishna mantra consists of three names of Krishna in a special arrangement:

The name Krishna means the all-attractive person. This name is perfectly appropriate since Krishna attracts everyone by His superexcellent qualities. Even those who are not aware of their relationship with Krishna are attracted to His qualities as they appear in various people and natural phenomena in the physical world. (Everything attractive in this world is a reflection of Krishna’s qualities.) The name Rama means ever-increasing transcendental ecstasy. One can immediately experience transcendental ecstasy if one chants this mantra sincerely. Hare is an address to the internal potency of Krishna that helps us to achieve pure love for Him. This hearing process is extremely powerful and has the potency to elevate anyone to the position of self-realization, which is the ultimate perfection of existence.