Quotes on Illusion and Enlightenment 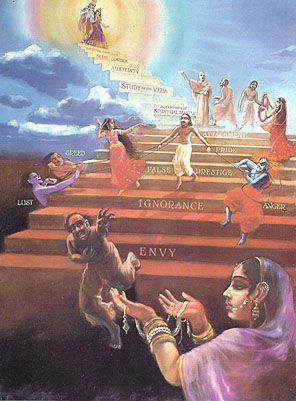 “Illusioned by the material energy, people are so engrossed in subject matter for sense gratification that they have very little time to understand the question of self-understanding, even though it is a fact that without this self-understanding all activities result in ultimate defeat in the struggle for existence. Perhaps one has no idea that one must think of the soul, and also make a solution of the material miseries.” Bhagavad-gita As It Is, purport to 2.29

“A sleeping person imagines an alternative reality for himself and, seeing himself as having various names and forms, forgets his waking identity, which is distinct from the dream. Similarly, the senses of one whose consciousness is bewildered by illusion perceive only the names and forms of material objects. Thus such a person loses his memory and cannot know You.” Srimad-Bhagavatam, 10.84.24-25

“The consciousness of the individual soul is prone to be forgetful. When he is forgetful of his real nature, he obtains education and enlightenment from the superior lessons of Krishna. But Krishna is not like the forgetful soul. If so, Krishna’s teachings of Bhagavad-gita would be useless.” Bhagavad-gita As It Is, purport to 2.20

“Bhagavad-gita can be read or heard many times, but because it gives great pleasure, the more one reads Bhagavad-gita the more he gets the appetite to read and understand it, and each time he gets new enlightenment. That is the nature of the transcendental message.” Srimad-Bhagavatam, purport to 3.25.2

“If one takes seriously the lotus feet of Kṛṣṇa, who is seated within one’s heart, the Lord eradicates all ignorance. By the torch of knowledge, one immediately understands everything properly by the special mercy of the Supreme Lord and becomes self-realized. In other words, although a devotee may externally not be very well educated, because of his devotional service the Supreme Personality of Godhead gives him enlightenment from within. If the Lord gives enlightenment from within, how can one be in ignorance?” Srimad-Bhagavatam, purport to 8.3.16

“Devotional service is enlightenment or awakening. When the living entity perfectly performs spiritual activities under the direction of the spiritual master, he becomes perfect in knowledge and understands that he is not God but a servant of God.” Chaitanya-Charitamrita, Adi-lila, purport to 7.118