Shiva, the Auspicious One

Today is Shiva-ratri, a special day to remember Shiva. In the Vaishnava tradition, which is what I follow, Shiva is appreciated as one of the foremost devotees of Vishnu or Krishna.

Shiva has many names but one of them (and my favorite) is Nataraja, the cosmic dancer. Literally nataraja means ‘the king of dance’. Under the supervision and maintenance of Vishnu, Brahma cyclically creates the material universe and Shiva destroys it. That is Shiva’s service. 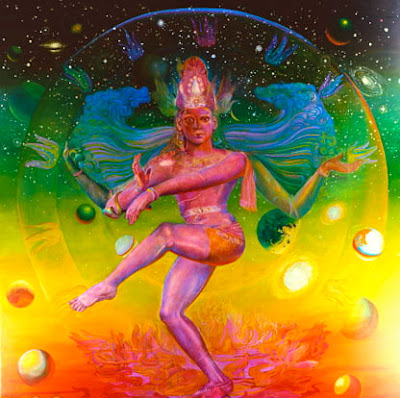 “Wearing matted locks of disheveled hair, and eager to conceal his actual nature, he staggers about like a madman. On his head he happily carries the Ganges, which has washed the lotus feet of Lord Krishna. When he dances he destroys the universe.” Brihad-Bhagavatamrita

Yes, the Ganges actually flows from the galaxy first down on Shiva’s head, who is situated in the Himalayas, and only then down on earth. Because of this Shiva is the greatest yogi, in constant meditation on Krishna. 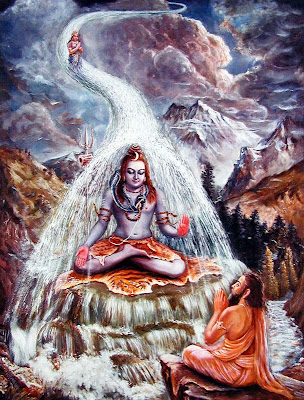 Another name of Shiva is Asutosha, ‘easily pacified’. A lot of people, especially in India, worship Shiva for this reason – to get quick material blessings. But being Asutosha, Shiva also is easily irritated. That’s why worshiping Shiva can be tricky business.

He is also known as Bhutanatha, ‘the lord of ghosts’. This shows Shiva’s super compassionate nature. In case you didn’t know, ghosts are real. There are people whose activities were so ignorant and degraded that after death they do not karmically qualify for another human body, so they stick around. Not in their physical bodies obviously, but disembodied, or in their “astral” body. Shiva sees the sad situation of the ghostly individuals and allows them to worship him so they can be gradually guided toward a path of self-realization. He’s kind to the ghosts and eventually places them in human wombs. (As a side note, before you make babies, make a prayer or two to have a nice soul be placed into your/your lady’s womb.) 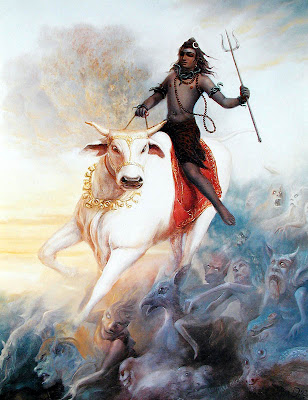 Shiva apparently lives in the mode of ignorance like his companions (covers his body with ashes, wears animal skins) but inside he’s on the highest platform of goodness. That’s why he’s bewildering to the mundane and inspiring to the transcendentalist.

Shiva is also known for ganja smoking (ganja is Sanskrit for cannabis). My spiritual master A.C. Bhaktivedanta Swami Prabhupada once said that it’s not our place to imitate Shiva though and smoke pot like him unless we can do other things Shiva does, such as drink an entire ocean of poison. (Hear the story of Shiva and poison) 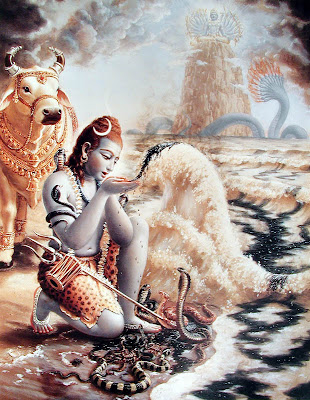 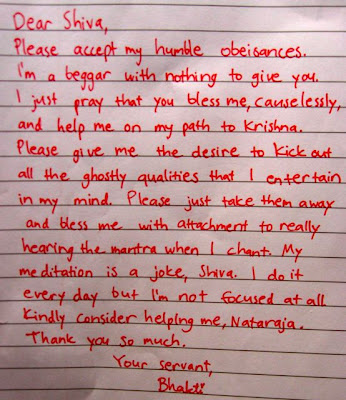 Shiva lives on the Kailash mountain. There is a beautiful description of it in the 4th canto of Srimad-Bhagavatam, beginning here. A glimpse of the description:

“There are many waterfalls, and in the mountains there are many beautiful caves in which the very beautiful wives of the mystics are found. On Kailash Hill there is always the rhytmical sound of the peacocks’ sweet vibrations and the bees’ humming. Cuckoos are always singing, and other birds whisper amongst themselves.” Srimad-Bhagavatam 4.6.11-12 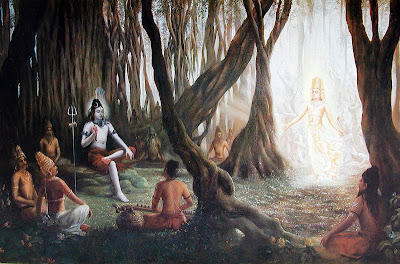 One more name of Shiva is Rudra. Rudra is a fierce and powerful aspect of Shiva. You can feel Rudra’s spirit when you get angry or when it’s very windy out. It’s the Rudra principle acting. Stormy sea water or blazing fire are also representations of Rudra. (read more about Rudra here)

Shiva and Parvati actually got married on this day. Below Shiva instructs her. I just love that picture. Shiva’s feminine energy is also known as Shakti, Durga, Kali and Devi. Shiva’s followers (Shaivites) have a clay marking of three horizontal lines on their foreheads like Shiva has here. 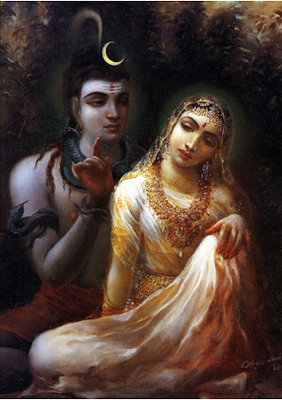 If you want, along with the Hare Krishna mantra, you can chant this mantra for him: om namah shivaya, which means that you’re offering him your respects.