From Misery to Purity by Thinking of Krishna 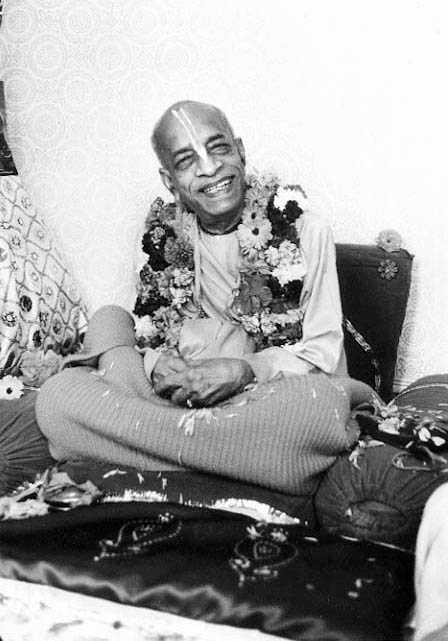 material energy which is so miserable condition?” Duhkhalayam asasvatam. So it is not Krishna willingly created. But He gave the chance to the living entities who forgot Krishna. He forgot Krishna’s service and wanted to enjoy this material world. Indriya-pritaye. Nunam pramattah kurute vikarma. Here they are doing just against the law, kurute vikarma. Karma, vikarma, and akarma.

So we have very good experience, especially in big, big cities. People, just to get money they are doing so many unlawful activities, vikarma. That is vikarma. They know that “If I do this, it is punishable by law,” but still, for getting money they do that. That is the nature of this material world. For sense gratification one can do anything, risking life also. The thief is stealing stealthily, hiding and risking life to get some money. Why money? The money will supply his sense gratification.

Therefore, when one is after sense gratification, he is mad, he becomes mad. Balavan indriya-grama durdanta. Indriya-grama, these are the adjectives. Durdanta indriya-kala-sarpa-patali. These are the description. Indriya, the senses, are just like snakes, kala-sarpa-patali. As the snake, as soon as it bites, immediately there is death, so similarly, our indriyas, the material senses, are like durdanta indriya-kala-sarpa-patali, and we are using it. These sense are being used in this material world. Therefore it is said, nunam pramattah. They have become mad, mad after sense gratification. The sublime sense gratification is sex. Therefore it is advised that,

So we shall be very much careful about the senses. The whole yogic process means to control the senses. Yoga indriya-samyamah. Indriyas are so powerful that it drags us to the hellish condition of life. It is very difficult. So this material world means all crazy, mad fellow after sense gratification. Nunam pramattah kurute vikarma. Why they are acting unlawful things, either stately unlawful or according to scripture unlawful? Yad indriya-pritaye, only for sense gratification. Yad indriya-pritaya aprnoti.

So sastra [scripture] says… It is the statement of Risabhadeva. He says, na sadhu manye: “No, no. It is not good.” Na sadhu manye yata atmano ‘yam. Atmanah, the soul. Asann api klesada asa dehah. The atma is covered by this material body, although it is temporary. Sometimes it is for ten years or sometimes twenty years, sometimes hundred years, sometimes millions of years, but it is limited. Either you get the body of Lord Brahma or the body of the poor ant, they are all temporary. It will be finished. So although it is finishable…

So this is our position. Therefore atma-darsana, one must know what he is. He is spiritual being. Spiritual being, he has nothing to do with this material world, but somehow or other, we have fallen in this material world. Anadi karama-phale, padi’ bhavarnava-jale. It is just like ocean. So just like if you fall down from the boat or the ship, then it is struggle for existence. You may be very nice swimmer, but that does not mean in the water you will be comfortable. That is not possible. Similarly, we living entities, part and parcel of God, we are as pure as God. Krishna, God, is pure. Param brahma param dhama pavitram paramam bhavan. Pavitra. So similarly… Pavitra means without material contamination. That is pavitra.

An excerpt from a lecture given in India, Dec 17 1974. Download the full lecture here.