“Krishna” and “Christ” with Srila Prabhupada and Father Emmanuel 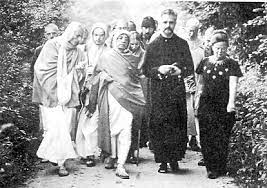 Srila Prabhupada:
What is the meaning of the word Christ?

Father Emmanuel: Christ comes from the Greek word Christos, meaning “the anointed one.”

Srila Prabhupada: Christos is the Greek version of the word Krishna.

Father Emmanuel: This is very interesting.

Srila Prabhupada: When an Indian person calls on Krishna, he often says, “Krishta.” Krishta is a Sanskrit word meaning “attraction.” So when we address God as “Christ,” “Krishta,” or “Krishna,” we indicate the same all-attractive Supreme Personality of Godhead. When Jesus said, “Our Father, who art in heaven, sanctified be Thy name,” that name of God was “Krishta” or “Krishna.” Do you agree?

Father Emmanuel: I think Jesus, as the son of God, has revealed to us the actual name of God: Christ. We can call God “Father,” but if we want to address Him by His actual name, we have to say “Christ.”

Srila Prabhupada: Yes. “Christ” is another way of saying Krishta, and “Krishta” is another way of pronouncing Krishna, the name of God. Jesus said that one should glorify the name of God, but yesterday I heard one theologian say that God has no name — that we can call Him only “Father.” A son may call his father “Father,” but the father also has a specific name. Similarly, “God” is the general name of the Supreme Personality of Godhead, whose specific name is Krishna. Therefore whether you call God “Christ,” “Krishta,” or “Krishna,” ultimately you are addressing the same Supreme Personality of Godhead.

Father Emmanuel: Yes, if we speak of God’s actual name, then we must say, “Christos.” In our religion, we have the Trinity: the Father, Son, and the Holy Spirit. We believe we can know the name of God only by revelation from the Son of God. Jesus Christ revealed the name of the father, and therefore we take the name Christ as the revealed name of God.

Srila Prabhupada: Actually, it doesn’t matter — Krishna or Christ — the name is the same. The main point is to follow the injunctions of the Vedic scriptures that recommend chanting the name of God in this age.

Srila Prabhupada: Yes — in the animal kingdom. But the civilized human being, the religious human being, is not meant to kill and eat animals. If you stop killing animals and chant the holy name Christ, everything will be perfect. I have not come to teach you, but only to request you to please chant the name of God. The Bible also demands this of you. So let’s kindly cooperate and chant, and if you have a prejudice against chanting the name Krishna, then chant “Christos” or “Krishta” — there is no difference. Sri Caitanya said: namnam akari bahudha nija-sarva-saktih. “God has millions and millions of names, and because there is no difference between God’s name and Himself, each one of these names has the same potency as God.” Therefore, even if you accept designations like “Hindu,” “Christian,” or “Muhammadan,” if you simply chant the name of God found in your own scriptures, you will attain the spiritual platform. Human life is meant for self-realization — to learn how to love God. That is the actual beauty of man. Whether you discharge this duty as a Hindu, a Christian, or a Muhammadan, it doesn’t matter — but discharge it!

Srila Prabhupada [pointing to a string of 108 meditation beads]: We always have these beads, just as you have your rosary. You are chanting, but why don’t the other Christians also chant? Why should they miss this opportunity as human beings? Cats and dogs cannot chant, but we can, because we have a human tongue. If we chant the holy names of God, we cannot lose anything; on the contrary, we gain greatly. My disciples practice chanting Hare Krsna constantly. They could also go to the cinema or do so many other things, but they have given everything up. They eat neither fish nor meat nor eggs, they don’t take intoxicants, they don’t drink, they don’t smoke, they don’t partake in gambling, they don’t speculate, and they don’t maintain illicit sexual connections. But they do chant the holy name of God. If you would like to cooperate with us, then go to the churches and chant, “Christ,” “Krishta,” or “Krishna.” What could be the objection?

Father Emmanuel: There is none For my part, I would be glad to join you….

Srila Prabhupada: I think the Christian priests should cooperate with the Krishna consciousness movement. They should chant the name Christ or Christos and should stop condoning the slaughter of animals. This program follows the teachings of the Bible; it is not my philosophy. Please act accordingly and you will see how the world situation will change.

Krishna specifically states that this process of Krishna consciousness is susukham, very pleasant and easy to practice. Indeed, the devotional process is very pleasant; we melodiously sing with instruments, and someone will listen and also join. Of course the music should be in relation with the Supreme Lord, in glorification of Him. Hearing Bhagavad-gita is also part of devotional service, and in addition to hearing it one should be eager to apply it in his life. Krishna consciousness is a science and should not be accepted blindly. There are nine processes of devotional service recommended (hearing, chanting, remembering, worshiping, praying, serving, engaging as a servitor of the Lord, establishing friendly relations with the Lord, offering everything to the Lord). These are all easy to practice and should be joyfully performed.

Of course if one thinks that Bhagavad-gita and the Hare Krishna mantra are part of the Hindu system and doesn’t want to accept them because of this, he can nonetheless attend the Christian church and sing there. There is no difference between this process and that process; the point is whatever process one follows, he must become God conscious. God is neither Muslim nor Hindu nor Christian — He is God. Nor are we to be considered Hindu, Muslim or Christian. These are bodily designations. We are all pure spirit, part and parcel of the Supreme.