Who is Lord Siva? 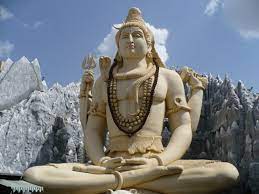 Nowadays it is very fashionable to chant to and warship Lord Siva. That is good, but sometimes it becomes just a fashion or cool or something, and we want to gratify our senses or ego by being (or making a show of being) a devotee of Siva.

This is not pleasing to Lord Siva. Siva is a person similarly to how we are persons BUT he is not a living entity like you and me he is ‘Siva shakti’ – He is in another category far above the rest of the living entities like you and me. It is said that there are two positions that are practically impossible to understand one is the position of the guru and the other is the position of Siva.

So in this situation where it is above our tiny pea-brains to understand and beyond the ability of our intellect to fathom, we must simply accept the words from the higher authorities. Srila Prabhupada is the most advanced spiritual master and the most recent Acharya and link to the Guru paramapara, so we can simply hear his words and accept them. Srila Prabhupada speaks from and quotes the authorized bona fide Veda’s where all knowladge of Siva came from originally so by hearing from the Vedic version from such a thoroughly honest and self realized master we may also realize the truth.

The following is an excerpt from the most important book of all the Vedic literature on the identity of Lord Siva, the Srimad Bhagavatam 4.30.38 lets here what it has to say in this regard:

Without taking shelter of the lotus feet of the Personality of Godhead, one cannot attain relief from the clutches of maya, the repetition of birth, old age, disease and death. The Pracetas [the progenitors of mankind] received the shelter of the Supreme Personality of Godhead by the grace of Lord Siva. Lord Siva is the supreme devotee of Lord Visnu, the Supreme Personality of Godhead. Vaisnavanam yatha sambhuh: the most exalted Vaisnava is Lord Siva, and those who are actually devotees of Lord Siva follow Lord Siva’s advice and take shelter at the lotus feet of Lord Visnu. The so-called devotees of Lord Siva, who are simply after material prosperity, are in a way deceived by Lord Siva. He does not actually deceive them, because Lord Siva has no business deceiving people, but because the so-called devotees of Lord Siva want to be deceived, Lord Siva, who is very easily pleased, allows them all kinds of material benedictions. These benedictions might ironically result in the destruction of the so-called devotees. For instance, Ravana took all material benediction from Lord Siva, but the result was that he was ultimately destroyed with his family, kingdom and everything else because he misused Lord Siva’s benediction. Because of his material power, he became very proud and puffed up so that he dared kidnap the wife of Lord Ramacandra. In this way he was ruined. To get material benedictions from Lord Siva is not difficult, but actually these are not benedictions. The Pracetas received benediction from Lord Siva, and as a result they attained the shelter of the lotus feet of Lord Visnu. This is real benediction. The gopis also worshiped Lord Siva in Vrndavana, and the lord is still staying there as Gopisvara. The gopis, however, prayed that Lord Siva bless them by giving them Lord Krsna as their husband. There is no harm in worshiping the demigods, provided that one’s aim is to return home, back to Godhead. Generally people go to the demigods for material benefit, as indicated in Bhagavad-gita (7.20):

“Those whose minds are distorted by material desires surrender unto demigods and follow the particular rules and regulations of worship according to their own natures.” One enamored by material benefits is called hrta jnana (“one who has lost his intelligence”). In this connection it is to be noted that sometimes in revealed scriptures Lord Siva is described as being nondifferent from the Supreme Personality of Godhead. The point is that Lord Siva and Lord Visnu are so intimately connected that there is no difference in opinion. The actual fact is, ekale isvara krsna, ara saba bhrtya: “The only supreme master is Krsna, and all others are His devotees or servants.” (Cc. Adi 5.142) This is the real fact, and there is no difference of opinion between Lord Siva and Lord Visnu in this connection. Nowhere in revealed scripture does Lord Siva claim to be equal to Lord Visnu. This is simply the creation of the so-called devotees of Lord Siva, who claim that Lord Siva and Lord Visnu are one. This is strictly forbidden in the Vaisnava-tantra: yas tu narayanam devam. Lord Visnu, Lord Siva and Lord Brahma are intimately connected as master and servants. Siva-virinci-nutam. Visnu is honored and offered obeisances by Lord Siva and Lord Brahma. To consider that they are all equal is a great offense. They are all equal in the sense that Lord Visnu is the Supreme Personality of Godhead and all others are His eternal servants.