Human Physiology is Not Designed for Eating Meat

Although some anthropologists contend that man is historically omnivorous, our anatomical equipment  teeth, jaws, and digestive system  favors a fleshless diet. The American Dietetic Association notes that “most of mankind for most of human history has lived on vegetarian or near-vegetarian diets.” And much of the world still lives that way. Even in most industrialized countries, the love affair with meat is less than a hundred years old. It started with the refrigerator car and the twentieth-century consumer society. But even with the twentieth century, man’s body hasn’t adapted to eating meat. One of the most important 18th century naturalists was a Swedish botanist and medical doctor named Karl von Linné who stated: “Man’s structure, external and internal, compared with that of the other animals, shows that fruit and succulent vegetables constitute his natural food.”

The chart below compares the anatomy of man with that of carnivorous and herbivorous animals. When you look at the comparison between herbivores and humans, we compare much more closely to herbivores than meat eating animals. Humans are clearly not designed to digest and ingest meat. 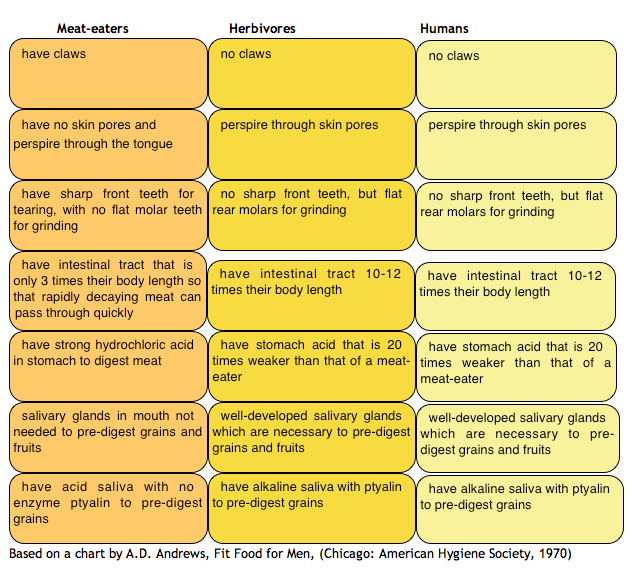 Clearly if humans were meant to eat meat we wouldn’t have so many crucial ingestive/digestive similarities with animals that are herbivores. Many people ask me, “If we weren’t supposed to eat meat than why do we?”. It is because we are conditioned to eat meat. Also, the ADA (American Dietetic Association) tells us that “most of mankind for most of human history has lived on a vegetarian or Lacto-ovo vegetarian diet”.

A popular statement that meat eaters say is; “In the wild, animals kill other animals for food. It’s nature.” First of all, we are not in the wild. Secondly, we can easily live without eating meat and killing, not to mention we’d be healthier. And finally, as we have already shown, we weren’t meant to eat meat. Meat and seafood putrefies within 4 hours after consumption and the remnants cling to the walls of the stomach and intestines for 3-4 days or longer than if a person is constipated. Furthermore, the reaction of saliva in humans is more alkaline, whereas in the case of flesh-eating or preying animals, it is clearly acidic. The alkaline saliva does not act properly on meat. The final point I would like to make on how we as humans were not meant to eat meat is this. All omnivorous and carnivorous animals eat their meat raw. When a lion kills an herbivore for food, it tears right into the stomach area to eat the organs that are filled with blood (nutrients). While eating the stomach, liver, intestine, etc., the lion laps the blood in the process of eating the dead animals flesh. Even bears that are omnivores eat salmon raw. However, eating raw or bloody meat disgust us as humans. Therefore, we must cook it and season it to buffer the taste of flesh. If a deer is burned in a forest fire, a carnivorous animal will NOT eat its flesh. Even circus lions have to be feed raw meat so that they will not starve to death. If humans were truly meant to eat meat, then we would eat all of our meat raw and bloody. The thought of eating such meat makes one’s stomach turn. This is my point on how we as humans are conditioned to believe that animal flesh is good for us and that we were meant to consume it for survival and health purposes. If we are true carnivores or omnivores, cooking our meat and seasoning it with salt, ketchup, or tabasco sauce would disguise and we as humans would refuse to eat our meat in this form.