The Celestial Science of Bhakti Yoga 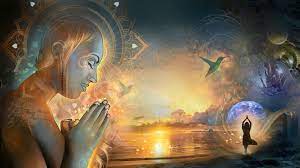 Srila Bhaktivinoda Thakur, who was born in 1838 during the British occupation of India, was the most exalted Vaishnava (devotee of Krishna) of his time. Although he was a highly respected district magistrate, he tirelessly served the mission of Chaitanya Mahaprabhu by writing hundreds of books and songs about bhakti-yoga, revealing lost holy places and giving invaluable guidance to all inquiring souls.

SRILA BHAKTIVINODA THAKUR – The practicing devotee, being mercifully graced by the Lord, experiences the walls of time and space dissolve. He perceives and experiences the boundless depths of the spiritual dimension. All is revealed in the ten directions – at every point of the compass as well as all that is above and all that is below – to be totally saturated with the divine bliss of His sweetest presence. At that point the devotee discovers a youthful personality within whose age is not measured from the year of his birth, but who is made of eternity. He then understands that this world of sensual pleasure and bodily experience is quite void of any real love or affection, which is the innate craving of all of mankind.

The Lord’s eternal consort, Srimati Radharani, is the complete embodiment of bliss, and within Her heart resides capacity to give the sweetest pleasure. Only She can give absolute bliss to Sri Krishna Himself. To become aware, even fractionally, of the depth of His love for Her and Her love for Him, is the greatest perfection achievable. Even higher than this, however, is to perform service to Them. And an even higher ecstasy envelops the aspirant when he yearns to serve that embodiment of bliss, Sri Radha, with his entire self. All this can be directly experienced through the chanting of Their holy names. Our line of self-realized masters has revealed that the totality of this can be experienced by chanting the sacred Hare Krishna maha-mantra.