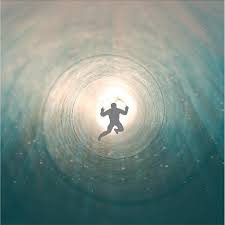 There is a transcendental world that is only accessible to self-realized persons. This world is radically different from the physical world in that there are no insentient objects in it. In the transcendental world the grass, trees, animals, water, land and sky are all fully conscious persons engaged in ecstatic, loving relationships with Lord Vishnu. Unlike their counterparts in the physical world, these forms are not composed of insentient elements. In the physical world, a tree is composed of atoms such as carbon, hydrogen, oxygen and nitrogen. The nuclei of these atoms are themselves composed of more fundamental elements, such as protons and neutrons, which are also composed of more fundamental elements, such as mesons and quarks. But a tree in the transcendental world is not composed of a hierarchy of insentient subunits. It is immutable, indestructible and eternal under all conditions. This is described in Caitanya Caritamrta (Introduction) and Srimad-Bhagavatam (Canto 3, Chapter 15, Text 18, Purport). The experiences and perceptions in the transcendental environment are far more intense and relishable than in the physical world. The colors are infinitely more intense. The tastes, smells, and sounds are overwhelmingly attractive.

But the most radical aspect of the transcendental environment is the fact that, although all perceptions and experiences are already so intense that the residents are constantly overwhelmed and enchanted by them, their intensity nevertheless increases at every moment. We simply have no experience of this in the physical world. All pleasures derived through the physical body and mind reach a peak and then decline. But transcendental pleasures continuously increase, although they already seem infinite, and there are no negative side effects since transcendental pleasures are a completely natural by-product of the psychological dynamics of self-realized persons.

We should not think, however, that self-realized persons are only interested in intense pleasures. They also work very hard and perform great sacrifices to bring transcendental knowledge to others so that they may also come to the exalted state of self-realization. This is the highest welfare work. In fact, this is the only real welfare work, since anything else that you might do for a person can only give him limited and temporary benefit. Of course, it is very good to feed a hungry person, but if you do not simultaneously give him knowledge, you have given him only temporary help. If you give him only knowledge pertaining to the physical world, you have also helped him very little, since he is not a product of the physical world. He is constitutionally transcendental and superhuman, but he has now forgotten this fact under the spell of ahankara. Clearly, the best thing you can do for him is to give him a process to directly experience his transcendental nature.

To be fully absorbed in an ecstatic loving relationship with Lord Vishnu is the natural state of being for all conscious selves. Pain, suffering, deficiency, lamentation, frustration, disappointment, illusion, hunger, thirst, disease, old age and death are unnatural for the conscious self. Bhakti yoga offers each one of us the chance to evolve from an unnatural and restricted condition to a state in which we experience ever-increasing inspiration and satisfaction in association with Lord Vishnu and other self-realized conscious selves in the transcendental state of existence.