Unlimited Sky of the Absolute Truth 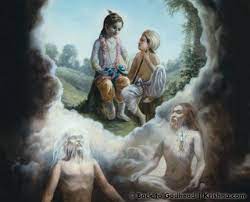 “The arrival of clouds, accompanied by thunder and flashes of lightning all over the sky, provides a picture of life-giving hope. Covered by deep bluish clouds, the sky appears artificially dressed. The thunder and lightning within the clouds are signs of hope for a new way of life.”

A.C. BHAKTIVEDANTA SWAMI (from The Light of the Bhagavata) – The serene sky, limitlessly expansive, is compared to the Absolute Truth. The living entities are truths manifested in relation with the modes of material nature. The deep bluish cloud covers only an insignificant portion of the limitless sky, and this fractional covering is compared to the quality of ignorance, or forgetfulness of the real nature of the living being. A living entity is as pure as the limitless sky. He becomes covered by the cloud of forgetfulness, however, in his tendency for enjoying the material world. Because of this quality, called tamas (ignorance), he considers himself different from the Absolute Whole and forgets his purity, which is like that of the clear sky. This forgetfulness gives rise to separatism in false ego. Thus the forgetful living entities, individually and collectively, make sounds like thundering clouds: “I am this,” “It is ours,” or “It is mine.” This mood of false separatism is called the quality of rajas, and it gives rise to a creative force for separate lordship over the mode of tamas. The flash of lightning is the only beam of hope that can lead one to the path of knowledge, and therefore it is compared to the mode of sattva, or goodness.

The limitless sky, or the all-pervading Absolute Truth (Brahman), is nondifferent from the covered portion of the sky, but simultaneously the whole sky is different from the fractional portion that is liable to be covered by the dark cloud. The cloud, accompanied by thunder and lightning, cannot possibly cover the limitless sky. Therefore the Absolute Truth, which is compared to the whole sky, is simultaneously one with the manifested living being and different from him. The living being is only a sample of the Absolute Truth and is Prone to be covered by the circumstantial cloud of ignorance.

There are two parties of philosophers, generally known as the monists and the dualists. The monist believes in the oneness of the Absolute Truth and the living entity, but the dualist believes in the separate identities of the living being and the Absolute Truth. Above these two classes of philosophers is the philosophy of acintya-bhedabheda tattva, or the truth of simultaneous oneness and difference. This philosophy was propounded by Lord Sri Chaitanya Mahaprabhu in His explanation of the Vedanta-sutras. The Vedanta is the medium of philosophical interpretations, and thus the Vedanta cannot be the absolute property of any Particular class of philosopher. A sincere seeker of the Absolute Truth is called a Vedantist. Veda means “knowledge.” Any department of knowledge is called a part of the Vedic knowledge, and vedanta means the ultimate conclusion of all branches of knowledge. As philosophy is called the science of all sciences, Vedanta is the ultimate philosophy of all philosophical speculations.