Glowworms or the Moon and the Stars? 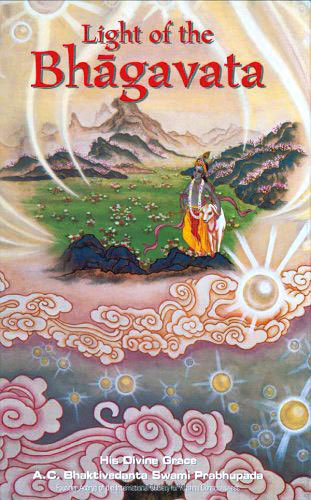 “The evening in the rainy season is dark all around. There is no sight of the twinkling stars on the horizon or the pleasing moon. They are covered by clouds. And the insignificant glowworms become prominent in the absence of the luminaries in the open sky.”

A.C. BHAKTIVEDANTA SWAMI (from The Light of the Bhagavata) – As there are seasonal changes within a year, so there are changing ages in the duration of the manifest cosmic world. These changing ages are called yugas, or periods. As there are three modes of nature, there are also various ages dominated by these three modes. The period dominated by the mode of goodness is called Satya-yuga, the period of passion is called Treta-yuga, the period of mixed passion and ignorance is called Dvapara-yuga, and the period of darkness and ignorance (the last period) is called Kali-yuga, or the age of quarrel. The word kali means “quarrel.” Kali-yuga is compared to the rainy season because many difficulties in life are experienced during this damp season.

In Kali-yuga there is a dearth of proper guidance. One may take guidance in the evening from the stars and moon, but in the rainy season the light of guidance comes from insignificant glowworms. The real light in life is the Vedic knowledge. Bhagavad-gita affirms that the purpose of the Veda is to know the all-powerful Personality of Godhead. But in this age of quarrel there are quarrels even over the point of the existence of Godhead. In the godless civilization of the age of quarrel there are countless religious societies, them trying to banish God from religion. Glowworms want to be prominent in the absence of the sun and the stars, and these small groups following various religious conceptions are like glowworms trying to be prominent before the eyes of the ignorant mass of people. There are now a number of self-made incarnations people follow without authority from the Vedic literatures, and there is regular competition between one incarnation’s group and another’s.

The Vedic knowledge comes in a tradition from the spiritual master through the chain of disciplic succession, and the knowledge must be acquired through this chain, without deviation. In the present age of quarrel the chain has been broken here and there, and thus the Veda is now interpreted by unauthorized men who have no realization. The so-called followers of the Vedas deny the existence of God, as in the darkness of a cloudy evening the glowworms deny the existence of the moon and stars. Saner people should not be waylaid by such unscrupulous men. Bhagavad-gita is the summary of all Vedic knowledge because it is spoken by the same Personality of Godhead who imparted the Vedic knowledge into the heart of Brahma, the first created being in the universe. Srimad-Bhagavatam was especially spoken for the guidance of the people of this age, which is darkened by the cloud of ignorance.